Based on the Charles Dickens novel Oliver Twist, the play is about an orphan boy who runs away from a workhouse and meets a pickpocket on the streets of London. Oliver is taken in by the pickpocket and he joins a household of young boys who are trained to steal for their master, Fagin. This version of Oliver Twist was performed by the theatre company “The Chamber theatre company” to the 1st ESO English students who were accompanied by her English teacher Conchi Jauregui, last January 22.

Dickens wrote in the first lines of the first chapter of the book:

“For a long time after it was ushered into this world of sorrow and trouble, by the parish surgeon, it remained a matter of considerable doubt whether the child would survive to bear any name at all”.

It was clear from the beginning of the play that in this version of the story Oliver was also going to suffer and struggle to survive in a hard world. We could feel his loneliness thanks to a gloom atmosphere created by the songs, the set of the stage, the lights and also the actors’ clothes. However, Oliver’s innocence and good heart won the wicked Fagin in the end and he could live happily with his own relative, Mr.Brownlow. All in all, a good moment to remember the master piece by Charles Dickens.

In the photos one can see 1st ESO students during the debate that took place after the play and the actors and actresses of the theatre company: 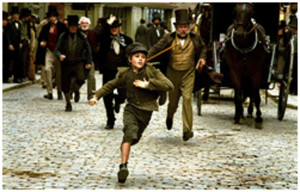 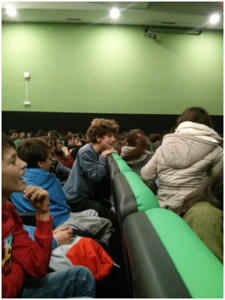 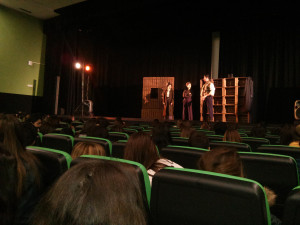